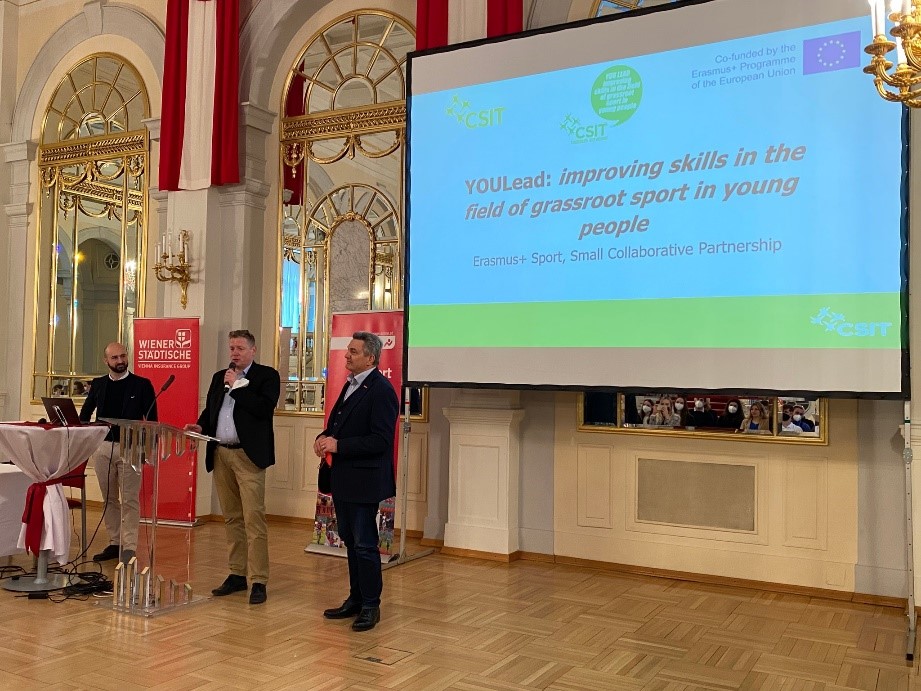 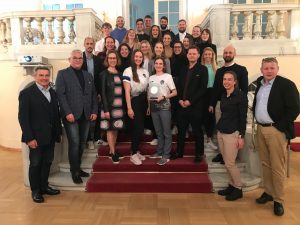 At the weekend, the EU co-funded project YOULEAD was concluded with the Final Conference in Vienna.

YOULEAD is about improving the skills of young people in the field of grassroots sports. 29 Young Leaders from six European countries have participated in the EU co-funded project over the past one and a half years and have achieved great results. The crowning glory was the final conference at the beginning of April in Vienna’s historic Haus des Sports, the centre of Austrian top and grassroots sport. The independently developed projects presented at the final conference were evaluated by a commission of experts and awarded diplomas.

Despite the travel difficulties caused by Corona in the past 18 months, two on-site meetings took place in Rome and, as the conclusion of the project, in Vienna. At the two meetings, the Young Leaders team had the opportunity for intensive cooperation and also the opportunity to enter into personal dialogue with established and experienced sports managers on site and to get to know different cultures and traditions on the sidelines on many occasions, all of whom practise innovative sports in their associations!

New ideas for new generations
The added value of the meetings enabled the formation of a team of 29 Young Leaders from Finland (TUL), Estonia (KALEV), Spain (UCEC), Austria (ASKÖ), Italy (AiCS) and Croatia (HLA), as well as 20 Senior Leaders (seven CSIT ExCom representatives). As part of the intergenerational dialogue, six brand new concepts for international youth sports camps were developed by the individual associations. By young leaders for other young people aged 16 to 20, based on shared values.

A Platform for everyone and for eternity
This will also have an impact on the respective national federations, as the groups will be able to propose new activities to their many young members with the new projects. CSIT benefits from the emergence of a new sector: fresh ideas for a world in permanent change.
The project does not end with the Final Conference in Vienna! The ideas of the camps have created a new PLATFORM that will act as a showcase and supplier of new ideas in the future.

Great Final Conference
Despite the still difficult circumstances due to the Corona Pandemic, the last meeting of YOULEAD and the Final Conference in Vienna was a great success! Within the three days in Austria’s capital, the final meeting was used to refine the developed concepts for the International Youth Sport Weeks.

There were also presentations and important analyses from CSIT ExCom members Henk Bouchoms (CSIT Sports Director and Vice-President) and Anu Rajajärvi (CSIT Youth Sports Officer and Vice-President) as well as from Anastasia Bouka, a Greek specialist for youth camps from the Greek CSIT member association HOCSH, one of the applicants for CSIT World Sports Games 2025 along with KOWSC from South Korea. 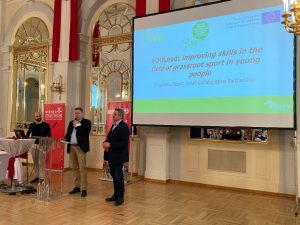 Colourful social programme
In addition to the intensive meetings and discussions, there was of course also time in Vienna for sporting activities such as disc golf and a city tour of a special kind. The Young Leaders had to explore Vienna on their own and complete predefined tasks. The experiences were presented in a funny video for the audience’s amusement during the final conference. The two-hour event was also attended by top Austrian officials such as Hermann Krist (ASKÖ President), Michael Maurer (ASKÖ Secretary General) and Elisabeth Speiser (Secretary General of Mamanet Austria).

KALEV is the big winner
After the presentations of the project leaders and the CSIT ExCom members as well as Anastasia Bouka, the highlight of the meeting came with the presentation of the youth camp projects and the awarding of the prizes. KALEV from Estonia received the prize for the best concept.

Surprise of host ASKÖ
And finally, there was a surprise for everyone from the CSIT member association ASKÖ, which also hosted the final conference: all associations participating in YOULEAD will be invited with a small group to the traditional ASKÖ Youth Sports Week in the Austrian Alps in summer! Thank you very much for your great Austrian hospitality!